by Missouri Digital News
in FASHION
0

What’s Next for Mugler?

Style Points is a weekly column about how fashion intersects with the wider world.

Early in the pandemic, Susan Korn and Doria Santlofer became a pod of two. As neighbors in lockdown-stricken New York City, Santlofer recalls, “there was nothing to do, so we baked each other pies and ordered avocados together and talked about what we wanted to wear.” When Korn, the designer of the fanciful accessories line Susan Alexandra, saw Santlofer, a sought-after stylist, wearing a vintage pointelle shirt one day, she flipped for the sweet, nostalgic fabric and started hunting for it online. “What I did find was very expensive and had to be ordered from one person in London,” she says. “And then it evolved into us being like, ‘Maybe we should make this, because what we really are looking for doesn’t exist.’” It was out of that impulse that their line, Rosette, launched in June, was born. 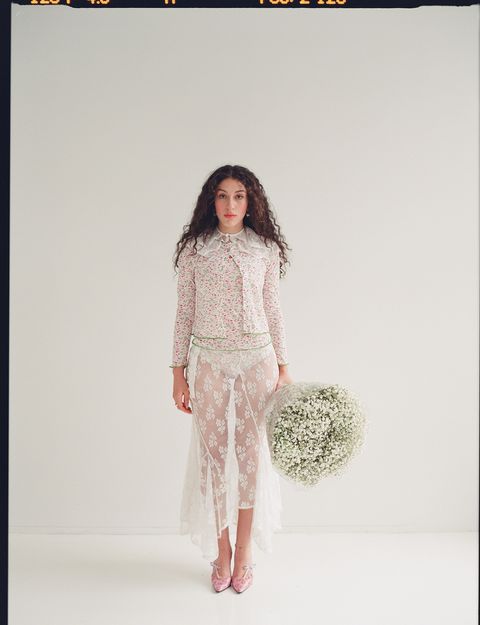 A look from Rosette.

Courtesy of the brand.

The collection, which includes camisoles, cardigans, and underwear, has already popped up on Kaia Gerber (who wears it in the short film The Palisades, costume designed by Santlofer), model Sheila Marquez, and stylist Karolyn Pho, to name just a few. It feels of a piece with other up-and-coming, women-led lingerie lines with a singularly innocent aesthetic. Millennials who were once eager to put away childish things (rosettes, pointelle, tiny florals, simple white cotton) in favor of sexy, padding-heavy mall lingerie are now boomeranging back. And Gen Z is on board, too. “I just don’t think that model of sexy is necessarily what we all are striving for anymore,” says Santlofer.

Instead, driven by fashion’s current mood of ambient nostalgia, the pendulum has swung back to what Korn calls “hyper-sweet, innocent, gentle escapism. It strikes this chord of a really beautiful time in people’s lives, hopefully.” Both women are in their 30s and, she says, “are at that cusp. We grew up in a certain world, and the world that we live in now is totally different.” Post-#MeToo and post-male gaze, there’s been a re-evaluation of how women want to dress, and along with it comes a wholesale upending of the standard lingerie drawer. 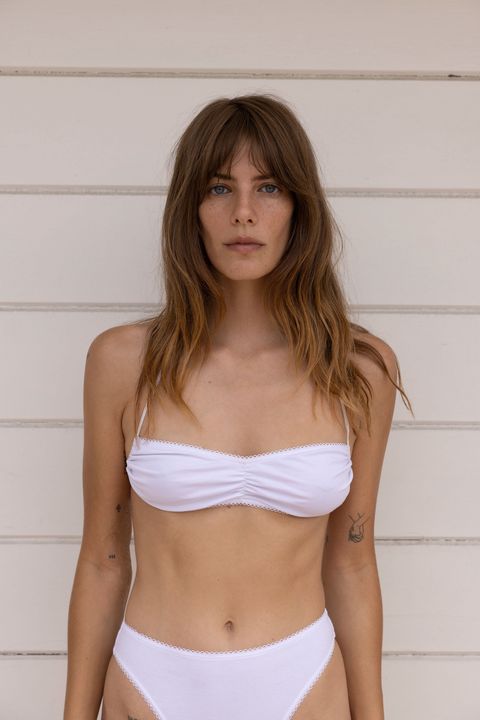 A look from Poppy Undies.

The ’90s are quite literally Emily Labowe’s area of expertise: In college, she wrote a thesis about nostalgia for the decade, as filtered through movies like Empire Records. At one point in that film, Liv Tyler’s character sports a red bra and simple white underwear, declaring, “I’m not as sweet as you think.” It’s a moment that served as one of the inspirations for Poppy Undies, Labowe’s line of high-rise, picot-edged, French-cut underwear (other touchstones include Nicole Kidman in Eyes Wide Shut and Sigourney Weaver in Alien).

Labowe launched the line in December 2020, and its personalized quality has caught the attention of Kendall Jenner (who wore a custom pair hand-embroidered with a picture of her Doberman) and influencer Alyssa Coscarelli, who recently collaborated with Poppy on a design inspired by her own tattoos. Labowe’s first full collection, called Poppy Pure, is due out in the fall. All the pieces will be made from organic cotton, and the underwear will feature more size-inclusive options. 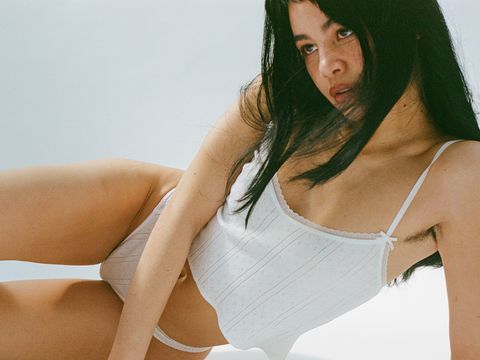 Interestingly enough, another up-and-comer in this space also comes from an academic background. While studying philosophy in L.A., Rose Colcord remembers her boyfriend asking her “why I didn’t have any nice underwear. I was like, ‘You cheeky sod! I have a whole drawer of Agent Provocateur and La Perla. What are you talking about?’ And he’s like, ‘No, I mean your daily underwear.’”

She realized that the two categories—“nice” and “everyday”—were separate, in a way they weren’t for men. “Why does my boyfriend only have one drawer for his Calvins, but I have my cute lingerie drawer which I never fucking touch?” she asked herself. “And then my daily underwear, which is thousands of overly washed, peeling-apart [pairs.] Women are made to choose between feeling comfortable and not cute, or beautiful and really uncomfortable.”

Everyday underwear is “seen as a boring product,” Colcord acknowledges, but she decided to apply the same laser focus to it that she did to her studies, asking friends with all different aesthetics about their preferences. That informal market research led her to start Cou Cou Intimates (named after the French greeting), which she wrote a business plan for at three in the morning, deciding she wanted to create a product that “made women feel that today was most important, rather than waiting until we look a certain way, or until we’re confident enough.” 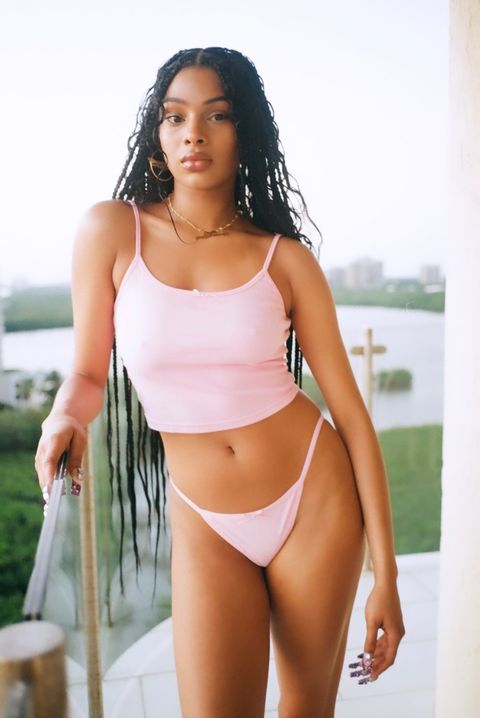 The ’90s (and 2000s), specifically her nostalgia for growing up in New York City in that era, also served as an impetus for Anna Levenshus, the founder and designer of PantyGal. After failing to find fashionable underwear that was 100 percent cotton, she decided to create her own. The styles—including Brazilian bikini underwear, inspired by her Brazilian heritage, and camisole sets—are embellished with cute bows. The concept, she says, is that “every day is a good underwear day.” Ratboi, a small sustainable brand based out of Ventura, California founded by Alexa Coughlin, has a similar everyday feel, with scoop-back bras, camisoles, and simple cotton panties that feature rosettes and the subtlest of lace trim. 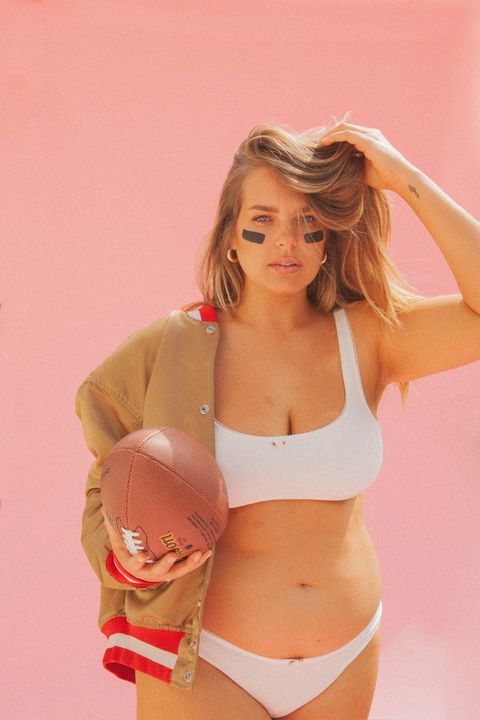 For these labels, the goal doesn’t seem to be total market domination, à la the underwear giants of the moment. Santlofer says that Rosette has no desire to be “the next Victoria’s Secret. We want to produce what we love, do it well, and not overdo it—and make what we love every season.” The prints will be retired after each collection, giving them a limited-edition feel. (Next season, the two plan to channel a little Goth-Victoriana with black lace, though they’re keeping the rosettes, of course.)

And the designers I spoke to all seem intent on reinventing underwear for a customer who cares more about pleasing herself than a partner. Colcord, the philosophy grad, references a passage from Jean-Paul Sartre’s Being and Nothingness. “He talks about there being two ways of living: one is living for yourself, as if you are not being looked at, then another is living as if you’re being watched—and the difference between those experiences and how liberating the former is.”

Santlofer says, “There’s just no pressure anymore to have to be something for somebody else. You have this beautiful crocheted edge and this beautiful rosette on a sweet pair of underwear, but it’s really just for you to know about. It’s about having no pressure to perform.” Even the name Rosette, Korn adds, speaks to this idea. “It’s the idea of a rose in that period before full bloom. There’s a quietness and a reserve about it, and it’s an internal beauty. It’s all shrouded in the vines and leaves, about to emerge.”

Khloé Kardashian and Tristan Thompson were first linked together in 2016, and have had many ups and downs during the past six years. In that time, they had...

What’s Next for Mugler?

After the death of its namesake founder, the brand paves a new—and commercial—way forward. Source link

If you are looking for *that* red dress to heat thing sup, we have found more than a few options for you! by Team TCF As The Curvy...

On Thursday, January 19, Pete Davidson was seen with his rumored new girlfriend, Chase Sui Wonders, at a date at Universal Studios Hollywood. TMZ shared a shot of...

This weekend, star Keke Palmer celebrated her coming child with partner Darius Jackson with a “Once Upon A Baby” themed baby shower, and it looked like an absolute...

eLearning For SMEs And Start-Ups: Why It Is Ideal

Emmys 2022: Tim Robinson Wins Best Actor in Short Form Series for I Think You Should Leave

Cheating Done by china with us. Remove China apps don't detective zoom. That a Chinese plan.

Jack Inglis of Southern Lehigh (Pa.) with possible Catch of the Year

Apple is too strict with copy and paste in iOS 16

All the Infected Zombies in ‘The Last of Us,’ Explained: Runners, Stalkers, Clickers, Bloaters

What Tom Brady Can Teach Us About Real Estate Investing